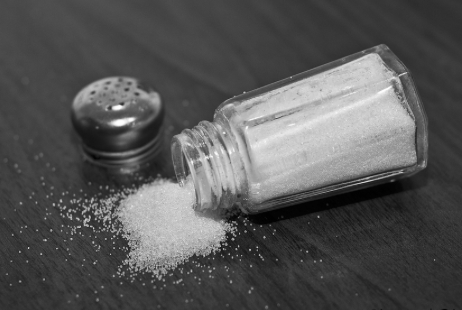 Dry skin, weight gain, depression, constipation, tiredness, and forgetfulness are symptoms that may have several underlying causes, but for many these symptoms are due to the body’s cells not receiving enough thyroid hormone because of a condition called hypothyroidism.

Many internet blogs and posts in the United States promote ways to heal they thyroid with iodine-rich foods such as seaweed, eggs, and seafood because of the correlation between iodine and the thyroid.  While these are all very healthy foods, iodine is most prevalent in something many of us consume too much-of….fortified table salt!

The question becomes, are Americans deficient enough in iodine to need to eat compensate by eating iodine-rich foods? Probably not and while Goiter, an abnormal enlargement of the thyroid gland, is most commonly caused by iodine deficiency and was a prevalent condition in the U.S. up until the 1920’s, it is rarely seen today in developed parts of the world.

The bigger issue becomes the fact that studies have found high iodine intake is frequently associated with Autoimmune thyroiditis, the most common cause of hypothyroidism.  A recent study conducted in a southern Italian village, compared 1411 people from 1995 to 1148 in 2010, following the introduction of the salt iodization program.  The prevalence of hypothyroidism was found to be higher in 2010 vs. 1995 at 5.0 % vs. 2.8%, respectively.  That’s almost double!

So, are there any foods that will “heal the thyroid”?  Science is conflicted and not much research has been conducted, but below two healthy options to consider that won’t have negative consequences on health.

Another idea is limiting intake of table salt and getting iodine from healthy sources which are seaweed, eggs, and seafood rather than relying on the fortified table salt.  It’s all about balance!

And are there any foods that are detrimental to the thyroid?  While this may sound comical, studies have found that consuming more than 2.2lbs per day for several months of Russian/Siberian kale of the species B. Napus, some collards, and Brussel sprouts was found to have a negative effect on the thyroid. And while these foods are super healthy, it’s almost laughable to think of someone consuming what would be the equivalent of over 11 cups of Brussel sprouts every day for months!  Talk about a cleanse!